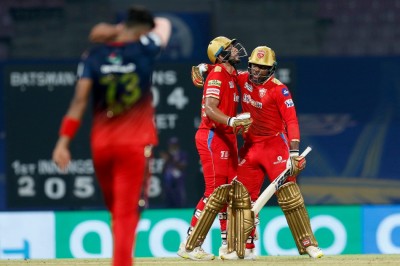 Match No 60 of Tata IPL 2022 will be played between Royal Challengers Bangalore and Punjab Kings(RCB vs PBKS) on 13th May 2022 at Brabourne Stadium, Mumbai. Match will start at 07:30PM IST.

Bangalore and Punjab have faced 29 times against each other in IPL. 13 times Bangalore have won match whereas Punjab has won 16 times. In last match between these two sides, Punjab Kings won in high scoring encounter.

Royal Challengers after suffering 3 consecutive losses have won 2 back-to-games and they are looking in good form. Currently, RCB is at No 4 at points table with 7 wins in 12 matches. Most of the RCB players have been in good form throughout the season, which has worked for team this season. Virat Kohli’s poor run has never let RCB down as Dinesh Karthik, Shahbaz Ahmed, Faf du Plessis and other batsmans have played brilliant knocks and cameos.

In bowling unit, Josh Hazlewood, Harshal Patel and combo of Glenn Maxwell-Shahbaz haven’t allowed batsmans to go after them. Mohammed Siraj is not much impressive this year as compared to last season. If he will be able to come in form, then RCB bowling lineup is going to be very deadly. Wanindu Hasaranga has gone for runs, but has changed games on his own and currently he is at No 2 in highest wicket takers.

For Punjab Kings, this season is of ups and downs. On their day, they are undefeatable, but inconsistency has really hurt Punjab Kings this season. Currently, they are at No 8 in points table with 5 wins in 11 games. In batting lineup, Liam Livingstone, Shikhar Dhawan and Bhanuka Rajapaksa are impressive. Jitesh Sharma has played brilliant counter-attacking knocks.

Bowling unit of Punjab Kings have very inconsistent except likes of Kagiso Rabada and Arshdeep Singh. Bowling of Punjab Kings haven’t let batsmans to go after them on their days. But on off-day, they are smashed all over the park. Bowlers of Punjab Kings specially Sandeep Sharma, Vaibhav Arora, Odean Smith etc. have started well in their game, but lacked temperament.