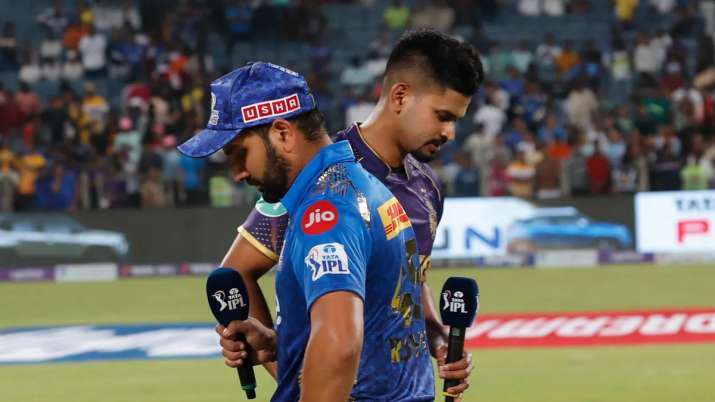 Match No 56 of Tata IPL 2022 will between played between Mumbai Indians and Kolkata Knight Riders(MI vs KKR) on 9th May 2022 at Dr DY Patil Sports Academy, Mumbai. Match will start at 07:30PM IST.

KKR have very terrible record against MI. Both teams have played 30 games against each other, Mumbai Indians have won 22 games whereas Kolkata Knight Riders just have 8 wins to their name against Mumbai Indians.

It’s not the best season for both teams, KKR lost all momentum they had in first 4 games. Mumbai Indians are probably out of playoffs race and they are at bottom of points table with 2 wins in 10 games. MI could be very dangerous side for teams who are in playoffs race as they can kill any team’s hopes. Some positives have been for MI in last two games.

Tim David has smashed opponent bowlers and Daniel Sams last over brilliance against Gujarat Titans are some positives for Mumbai Indians. Season have went not upto mark for Rohit Sharma, Kieron Pollard and Jasprit Bumrah. MI and fans will except some entertainment from these top T20 players.

Kolkata Knight Riders suffered a big loss against Lucknow Super Giants in last match. Now, they are at No 8 in points table with 4 wins in 11 matches. Opening pair have been a sign of concern for Kolkata Knight Riders throughout the season. It is looking KKR might try someone else in place of Baba Indrajith/ Aaron Finch at the top.

KKR is trying different players in bowling lineup. Bowlers haven’t able to show consistency this season except Sunil Narine. Bowlers have leaked runs on their off days. KKR can try benched players as their playoffs hopes are also looking dead. Match is also going to be like a dead-rubber.