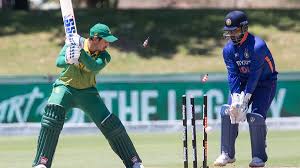 South Africa are coming into this series after 1-2 series lost against India, but India will be without their frontline players who will be travelling to Australia for T20 World Cup.

India will be with playing XI which played against Zimbabwe and West Indies. Shikhar Dhawan will be leading the attack and open with Shubman Gill. Shikhar is someone who is best choice for captaincy for fantasy team. Shreyas Iyer and Sanju Samson are other players to pick in Dream11.

Also, there are new players in squad, it is looking Rahul Tripathi will make his ODI debut as he is with team before Rajat Patidar. Shardul Thakur, most probably will be playing as an all-rounder, he is player to select in fantasy team with Deepak Chahar. Siraj will be 3rd pacer. In spin department, Kuldeep Yadav and Ravi Bishnoi will be playing. Kuldeep will be option to go with because of his experience.

For some players it will be big test to play against pace attack of South Africa.

Proteas team is looking favorites to win ODI series as India is without main players. Also they will be in good confidence after winning 3rd T20I one-sided. Quinton de Kock, once again will be a player to watch out and select in team. J Malan has good start in ODI Cricket. Aiden Markram can be X-Factor for South Africa in ODI series. He can be a vice-captaincy choice for this match.

Rassie van der Dussen is not in squad, replacing him is not going to be easy for South Africa, Heinrich Klaasen might play in his place. Wayne Parnell, most probably will be all-rounder for South Africa. Keshav Maharaj and Tabraiz Shamsi will be spinners again. In pace-attack Kagiso Rabada and Anrich Nortje will be in playing XI. Rabada and Maharaj has done well in T20s, they could be a good choice to pick again.