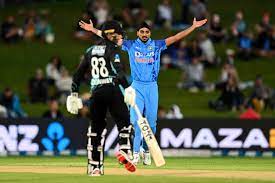 1st T20I of India and New Zealand(Ind vs NZ) 3-match series will be played on 27th January 2023 at JSCA International Stadium Complex, Ranchi. Match will start at 07:00PM IST.

Indian team defeated New Zealand by 3-0 in ODI series 2 days ago. They are likely to start on a high.

India once again in shorter format is without seniors, again they have given chance to young players in side. Shubman Gill hasn’t played that kind of knock in T20Is yet as he played in ODIs. Considering his from, he will be player to pick in fantasy team with captaincy choice. Rahul Tripathi is likely to retain his place.

Suryakumar Yadav is someone no one like to exclude from fantasy team. Deepak Hooda and skipper Hardik Pandya are good-finishers, both will be picks with Pandya as bowling option as well.

Bowlers have also shown good skill in few games they have played. Kuldeep Yadav will ne pick from spin bowling side, with one of Umran Malik/ Arshdeep Singh as other pick for fantasy team.

New Zealand is likely to play 6 bowling options for this match. Mitchell Santner among all-rounders will be pick. For fast bowling, New Zealand is going to back on Lockie Ferguson, but he is not in good for. Ish Sodhi is brilliant choice to pick with Blair Tickner/ Ferguson as other pick.